The National Mouse Club (NMC) was founded in the UK in 1895, and exhibitors today still breed towards its Standard of Excellence. Find out what it takes to show mice, how judging works, what some common faults are and how to build a successful stud.

The Basics
All About Showing
Common Faults

Is showing for me?

If you’re still looking into the showing scene, there are things to consider before taking the plunge. Hopefully the following article will help answer some common questions about showing mice in the UK.

Most people looking into joining the NMC have already kept, and probably bred, their own pet or feeder mice. This may have been on a relatively small scale, or in the case of feeders sometimes hundreds or even thousands of mice a year. None of these mice, however, will be of show quality. If you’re wondering if you can show your pets, the honest answer is no. They will not be of the standard required by the NMC, which looks at everything from the type and size of a mouse to the exact shade of colour, markings and more. Many years of selective breeding have been put into show mice (the club was founded in 1895) and this takes hard work and vigilance to maintain.

Don’t be discouraged though, as you have the perfect opportunity to make a start with stock from top breeders. You may also find that you fall for a variety you had never considered before after seeing it in the flesh. Be sure to talk to breeders of your preferred variety in depth and get as much advice as you can; learn from their experience. Top mice will not set you back a fortune and breeders are generous with the quality of animals they supply to newcomers. You may have to wait a month or two, but it really is worth it to get the best start possible. 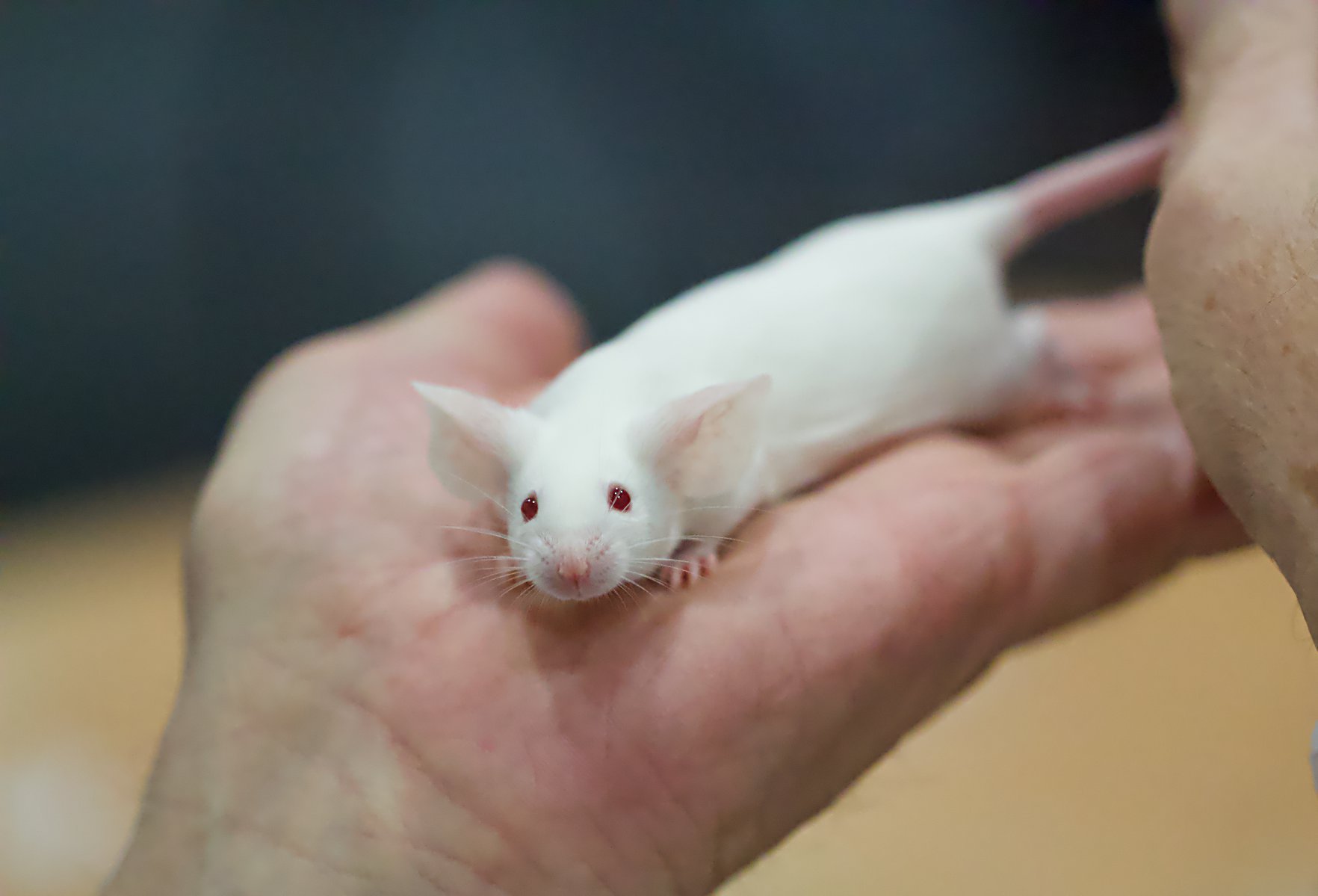 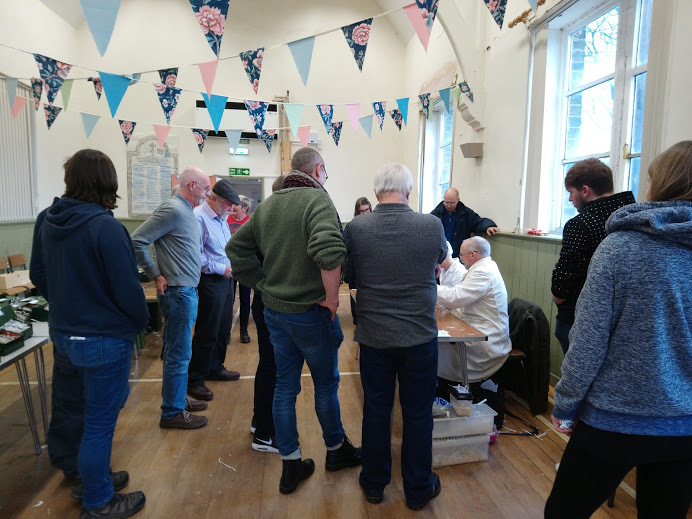 The exhibition mouse community in the UK is fairly small, with a core of regular successful exhibitors (like most fancies). The people are friendly and welcome new members with open arms. The Secretary is always available to answer questions from prospective members and if you visit a show you’ll find lots of breeders to talk to as well. Active members range from their twenties to their eighties and there’s always someone willing to ‘talk mice’!

Shows are held across England all year round, mostly taking place on Saturdays and some Sundays. The Show Calendar can be found on the NMC website and schedules are printed in the NMC News (available to members on subscription). You don’t have to be a member to come to a show, so if you’re interested then have a look round, introduce yourself and watch the judging.

Most shows are held in church halls and community centres, although there are larger shows throughout the year in conjunction with other animal fancies such as the Bradford Championship and London Championship. The organisers of these larger shows may charge an entrance fee, but there is no entrance fee for the mice-only shows organised by local clubs under the banner of the NMC. In summer there are also several agricultural shows, held outside in marquees as part of a larger event with other animals, crafts and stands selling various goods. 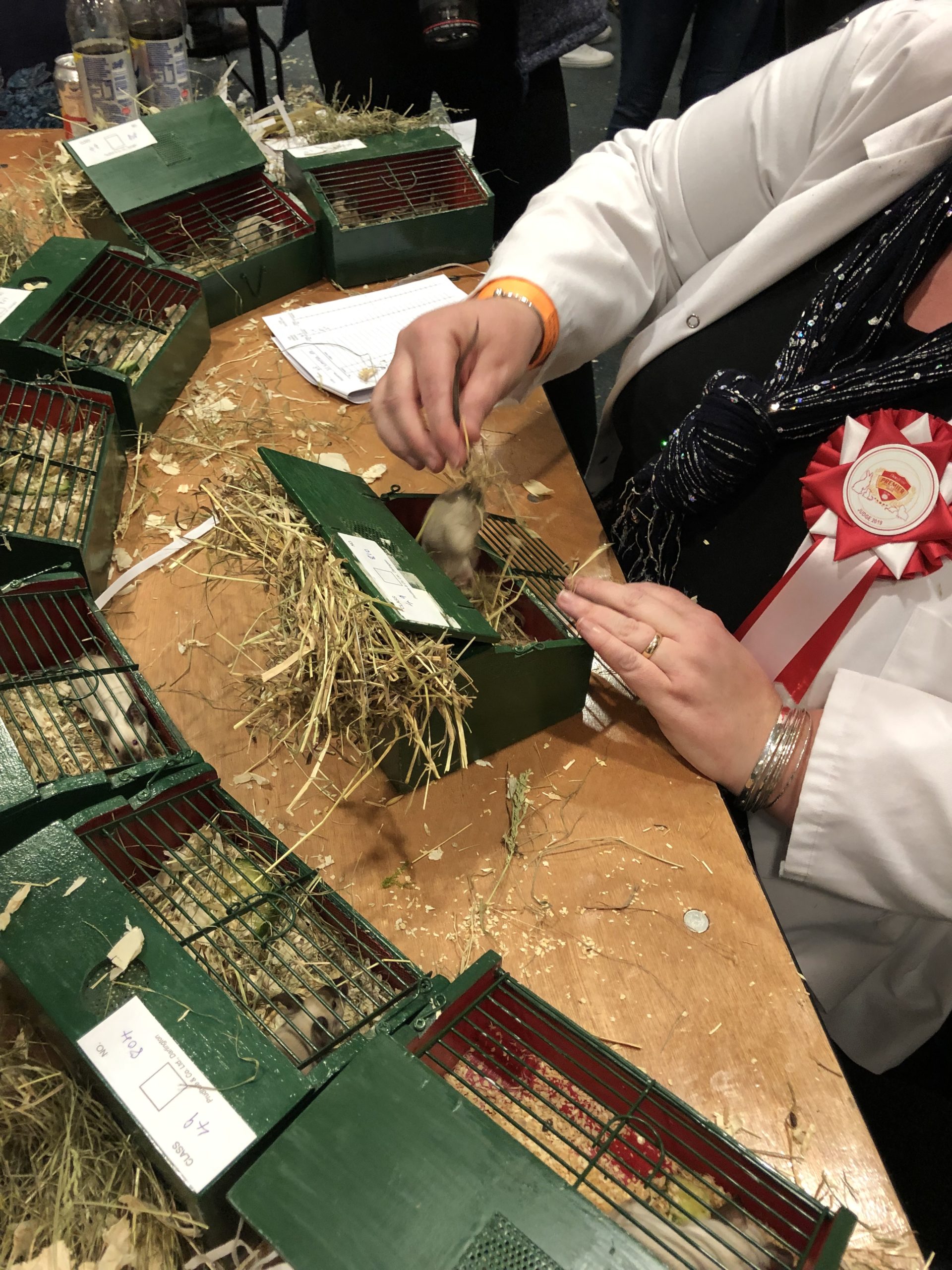 Before any mouse is put into its Maxey, an exhibitor should reassess its health. A fairly common problem in mice is mites. Any mouse with mites will be disqualified immediately and cannot be taken to a show. To do so knowingly in the hopes that the judge will not notice is to risk the contamination of other mice, and is very unsportsmanlike. The same goes for mice that have respiratory illnesses or other communicable problems.

Before you enter your mice you should of course check that they are all in good shape and fit to be shown. Sometimes despite this you will remove the mice on show day to put them into Maxeys and discover a problem.

Some mice, most often bucks, will have chipped ears. This is where they have torn (either by fighting or scratching) the ear and it appears to have a nick in it. This will not necessarily disqualify a mouse but it will prevent it getting top honours and winning its class. Unless the mouse excels on other points there is not much point entering a mouse with a chipped ear, unless it is entered into a class where this does not matter, like the Auction or Stud Buck class.

Although it sounds very obvious, mice with wounds or which look ill should not be entered. If a condition isn’t noticed by the breeder, the judge will notice it and disqualify the mouse. If this happens the exhibitor will be found and asked to remove the mouse to a different location to avoid contamination of other exhibits. Conditions that might go unnoticed but will disqualify a mouse include mites, respiratory illness, lumps (which could be abscesses or tumours etc.), blindness and deafness. All reasonable efforts should be made to ensure a mouse with these conditions is not shown.

Mice must be entered as either adults (over eight weeks) or u/8 (under eight weeks). Mice entered as the wrong age can be disqualified, so check carefully. NMC rules state that ‘No under 8 weeks mouse shall be eligible for competition unless of sufficient age to warrant travelling alone unaccompanied by its mother’.

Some people exhibit mice that are really far too young to be under so much stress and be away from their mother and littermates. These can be judged ‘no award – too young’, making it a waste of time bringing the mouse and possibly also stunting its growth by taking it away from its mother at too young an age. It is recommended that the youngest a mouse should be in the u/8 classes is 5 weeks old and the oldest is, of course, 7 weeks 6 days. Obviously the closer to the upper age limit the better in most cases in order to show off the mouse’s potential (except in coated varieties such as longhaired and astrex perhaps, where the coat is better at a younger age). Of course younger mice CAN win top prizes if they are outstanding examples of their variety.

Some people also may be tempted to enter an older mouse in the u/8 class in order to make it appear that it is a big and well developed mouse. Sometimes doubt can be cast by the mouse’s features, for example a u/8 siamese with good dark points may be under suspicion since the points develop with age. On such occasions the judge is likely to disqualify it for being in the wrong class. (This means that the judge risks controversy, as there is no real way to prove when the mouse was born.) 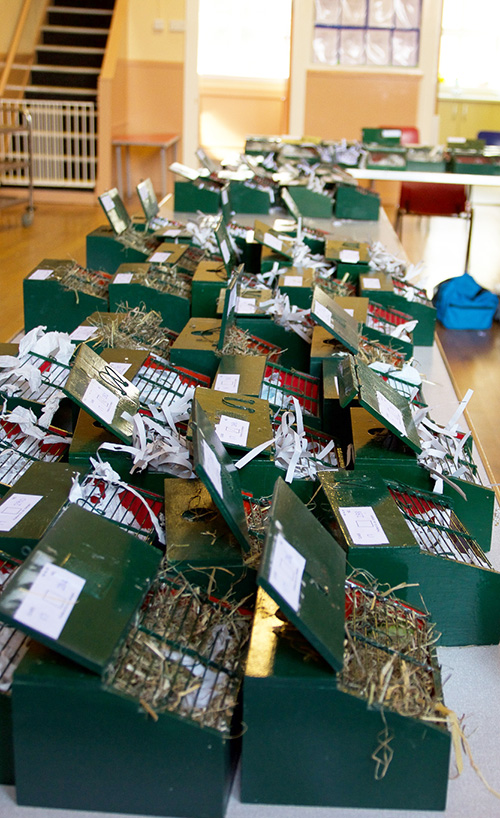 All mice must be shown in Maxey cages. These were invented by an early mouse fancier called Walter Maxey, who founded the NMC in 1895. The cages must be painted Middle Brunswick Green on the outside and Royal or Signal Red on the inside. There are both lidded and lidless designs of Maxey, both of which are acceptable. Only one mouse is allowed to be exhibited per cage except in auction classes where this is specially permitted.

All Maxey cages should be labelled on the bottom (out of view of the judges) with the fancier’s name. This helps the fancier to find his mice after judging has finished and also prevents any ‘stray’ Maxeys remaining unclaimed.

When exhibiting a large number of mice the fancier may find themselves with a problem when attaching show pen labels. Taking each mouse out of its Maxey at the show is not only time consuming but added stress for mice that are to be handled a good amount during the day. It helps to put a temporary label on each Maxey as you put the mouse in at home. Then all that remains to do at the show is to remove the home-made sticker and replace it with the official pen label provided by the show secretary. Some people also have a system for recording pen numbers of mice next to the cage number they came out of at home, to make sure every mouse is returned to its own home later in the day.

The substrate (shavings, sawdust etc) you use in your Maxey should not be too dusty or it will stick to your mouse’s coat, putting it at a disadvantage, and may also irritate its nasal passages, making it sneeze. Obviously the judge cannot assume the mouse is only sneezing due to dusty substrate and will disqualify it for snuffling. If you use a distinctive substrate in your breeding boxes you may want to consider using a more uniform one for showing in order to preserve your anonymity during judging.

The same goes for bedding. There are many types of bedding used in Maxeys. Some people use shredded paper, some use tissue type bedding and some use hay. There is no right answer to what you should use as it depends on individual preference. However, you must remember that hay can contain mites, although it does give the mouse something else to eat while in the Maxey. Hay is also said to be good for the coat as the mouse burrows through the hay, effectively ‘polishing’ its coat as it goes. Various types of paper are the most commonly used bedding. Don’t use something uniquely distinguishable, eg a paper of an unusual colour, as again this would identify your mice to the judge. When putting bedding into your Maxey you must make sure that you do not put in too much or too little. Too little bedding means that the mouse is likely to get cold and not show itself well. Too much bedding leaves little room for the mouse and also makes life difficult for the stewards.

Rule 18 a) of the NMC Rules and Standards stipulates that ‘All Maxey show cages should have sufficient food and moisture for the mouse during the show day’. Moisture can be provided by a piece of cucumber or carrot if desired, but is best removed for judging – and be aware that carrot can stain the coat. 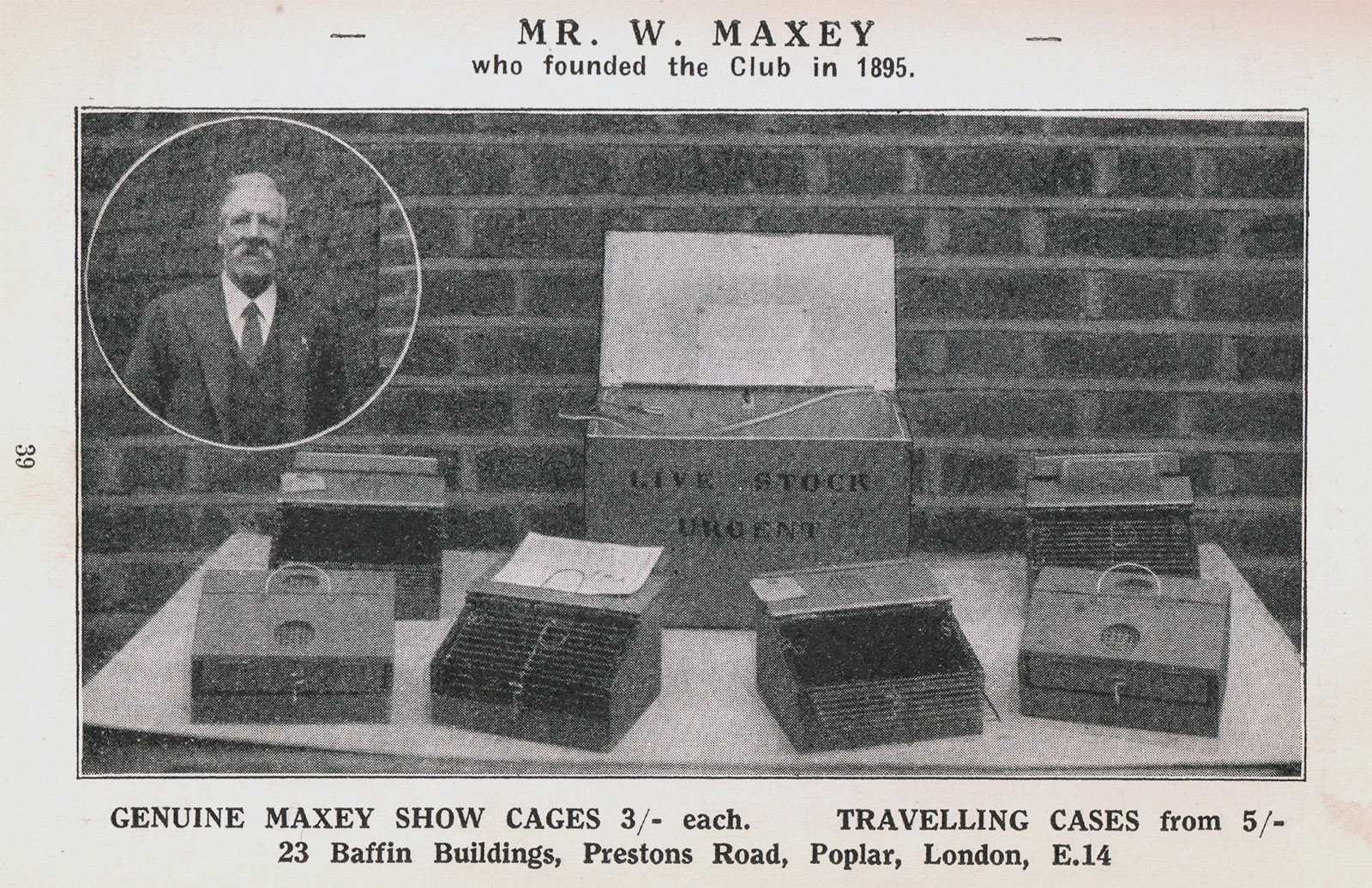 Next: All About Showing